"The severity of turbine operating conditions is increasing," says Peter Smith, technology manager for speciality lubricants at Shell Global Solutions. "They are running 24/7, and there's more stop-start, cyclic operation. You're bouncing between a high operational temperature and a cool ambient temperature."

Spinning turbines up quickly to cope with fluctuating loads, often due to variable renewable generation, places much more strain on lubricating oil than continuous operation. As well as power outputs, turbines' operating temperatures are also increasing, while the amount of oil in the system stays the same or even decreases.

"Looking at the ratio of turbine megawatt output:oil volume gives you an indication of oil stress," says Smith. "We're seeing increases of up to 400%."

The changes between GE's venerable Frame 5 gas turbines and its more recent 9E series illustrate this point well. Here, oil operating temperatures have risen from 60 to 70°C, while the oil stress index has jumped from around 3.5 to 10.0MW/m3.

Turbine oil must handle these demanding conditions to support maximum reliability and efficiency. In a recent Shell poll, more than 50% of global turbine operators said their main worry was the cost of an unplanned shutdown during turbine operation.

The oil must degrade slowly too: the survey found those operators also want to extend oil drainage service intervals to reduce maintenance.

So what properties should the ideal lubricant possess? For reliability, preventing metal-to-metal contact and control-valve sticking through a strong, consistent oil film has to come first.

To maintain that film strength, the base oil must release air rapidly and resist foaming.

"Dissolved air can lead to foaming when the oil load changes," says Smith. "You need a full fluid film in the bearing for it to carry the load, and foaming obviously reduces the film strength."

Good air release and anti-foaming also help to delay the oxidation that, along with other processes like anaerobic thermal degradation, can form lower-molecular-weight compounds, and more-reactive acids, ketones and aldehydes within the oil. These byproducts initially stay in solution but can react to form insoluble compounds that eventually precipitate out as sludge deposits. These sludges can then form damaging varnishes and lacquers on components like servo valves, as well as gumming up vital filters and oil passageways.

"More than 50% of global turbine operators said their main worry was the cost of an unplanned shutdown during turbine operation."

"If you have air dissolved in the oil, that will be released as it's pumped through the bearings and, as the load on the oil varies, you get bubbles of vapour forming - known as cavitation - that can then implode, and the oxidation this causes burns and chars the oil," explains Smith. "You can get small corrosive pits forming in the journal bearings."

Good water-separation properties are another must, particularly with steam turbines. Traditional oil chemistries are prone to forming a stable emulsion with water that again affects film strength and the oil's ability to carry bearing loads properly.

The oil has to be able to conduct heat away from vital turbine components like journal bearings. That demands high thermal conductivity and considerable specific-heat capacity - the ability to quickly absorb energy without increasing in temperature itself. Those properties also aid in slowing oil degradation and preventing the formation of bearing deposits.

"Turbines' journal bearings are made of white metal, which starts to melt above 120°C," says Smith. "Most turbines have thermocouples behind the journal bearings that will shut the turbine down if the temperature goes above 115°C."

Optimising the base oil and using specialised additives increases resistance to oxidation, extending oil life, and reducing those acids, deposits and varnishes. That makes for a more efficient turbine and a longer operational life due to reduced wear. However, Smith notes that turbine oils typically only contain around 1% additives compared with the 10-30% additive proportion found in car engine oils.

"With the very low additive level, you are extremely reliant on having an excellent-quality base oil," he says.

This is where Shell says its gas-to-liquid (GTL) technology scores highly. Rather than simply refining a crude mineral oil, with its huge variations in composition and performance, the GTL process synthesises a hydrocarbon base oil that as well as being extremely pure, is chemically designed for the purpose of lubrication.

"The GTL process allows us to finely control the composition of the base oil, something that would be extremely expensive and impractical to do with conventional refining techniques," says Smith. "The base oil we produce has a very limited molecular range, is contaminant-free and responds very well to additives."

The process begins with methane and oxygen at Shell's giant Pearl GTL plant in Qatar. A gasifier running at 1,600°C converts them into a mixture of hydrogen and carbon monoxide known as synthesis gas, or 'syngas'. In a proprietary catalytic process, the syngas is then converted into linear, long-chained waxy hydrocarbons, and water.

"These are typically solid at room temperature so are good for waxes but not lubricants," says Smith. "So we perform another conversion called isomerisation [hydrocracking] that puts branch points on the long chain 'backbone' of the linear hydrocarbon. Then we use distillation to separate out the different products."

"The latest oils improve performance over a decade ago by a factor of three or four. That’s seriously pushing the boundaries."

To develop its GTL turbine oils, Shell's engineers subjected the different base oils to a battery of tests to find the oil-additive combination that met their performance targets. Industry standards and OEM specifications form the baseline for those targets, with turbine manufacturers working closely with oil producers to make sure that lubricants suit new or improved models.

"They tell us if they are looking to change the metallurgy and optimise the design of their equipment, and what that might mean in terms of operating severity for the oil," says Smith. "Experience and proprietary knowledge comes into it a lot; we hold many patents for our GTL technology and lubricant applications."

Shell uses various test rigs, such as PCS Instruments' Mini Traction Machine, to assess friction coefficients under different temperature and load conditions. Oil-film formation and strength are related to viscosity index: a high-viscosity-index oil doesn't thin down too much at high temperatures or thicken up too much at low ones.

GTL lubricants have a very high viscosity index so, like modern multigrade car oil, they can be used across a very broad temperature range without their operating properties changing radically. However, the oil still needs to be thin enough to minimise drag, which will reduce turbine power output. Shell uses a bearing test rig to measure how well the oil maintains the bearing clearance and any energy loss due to drag.

"Conventional oils tend to thicken up significantly under load and actually form a thicker film than you really need to ensure metal-to-metal separation," says Smith. "GTL oils maintain their optimum viscosity, which helps to reduce churning losses, and they generate less friction at high speeds and temperatures than previous oils."

Partly because of the purity its production process confers, the GTL base oil has intrinsically good 'surface' properties: air release and anti-foaming performance is excellent. It also possesses high thermal conductivity and specific-heat capacity. Added to that, GTL base oils work very well with the specialised additives used for turbines.

"There's a very strong synergistic response from the antioxidants that you put in," Smith says. "That gives you the operational longevity and resistance to oxidation and thermal degradation in the turbine."

Oil-life service is a critical metric, and Shell's engineers use various methods, like the Wolf Strip and MAN-LTAT oxidation tests, to check for resistance to deposit formation. For the turbine oil stability test (TOST), they mix the oil with water and catalytic metals, then heat it and blow oxygen through it to find out how quickly the oil degrades and corrosive acids build up to a certain level.

TOST results for turbine oils made with different American Petroleum Institute (API) oil standards demonstrate recent progress: 15 years ago, API Group 1 oils would only give a life of around 5,000 hours; a decade ago, API Group 2 oils achieved around 10,000 hours - a significant improvement. However, the latest API Group 3 oils, the bracket in which the GTL products belong, can give 20,000 hours or more.

"The latest oils improve performance over a decade ago by a factor of three or four," says Smith. "That's seriously pushing the boundaries."

Those service-life results were borne out in turbine manufacturers' own tests and then confirmed in 18 months of field trials using a fleet of different turbine types from major vendors like GE and MAN. Currently being released commercially, Turbo S4 X will be the mainstay of Shell's new GTL range, with the Turbo S4 GX variant containing an extra anti-wear additive to cope with the shearing loads, high temperatures and high pressures found in turbine gearboxes.

A steam turbine has to last 15 years or longer, while a gas turbine might have a service life of ten years or more. By using the advanced oils available today and rigorously monitoring their condition, operators can maintain reliability, increase efficiency and significantly reduce the need for maintenance. 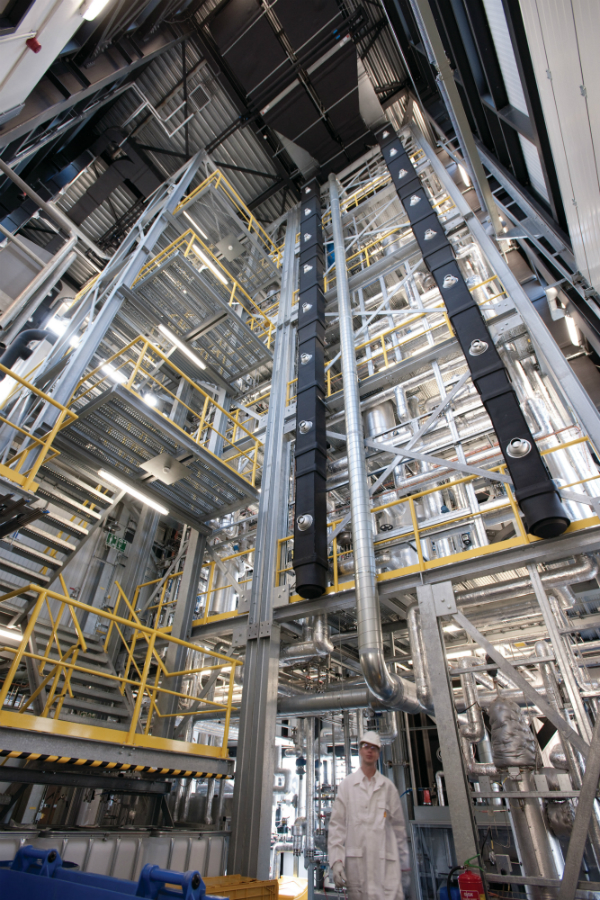 Put through its paces: Shell has carried out extensive testing...