Europe still leads the global offshore wind power market, but China is fast catching up, having amassed 510MW in just three years, and with the world’s largest offshore wind farm currently in the pipeline. James Lawson speaks with Aris Karcanias and Peter Sennekamp about the race to knock the UK and Denmark off the top spots.

Despite these benefits, Northern Europe still far outstrips other nations in offshore wind adoption. With 1,662 turbines installed and grid-connected by the end of 2012, it boasts more than 90% of offshore capacity. That's a total of 4,995MW, a 31% rise over the 3,827MW operating by the end of 2011.

Elsewhere, deep water, reluctant investors, high costs and inadequate technology are some of the factors holding offshore wind back from global acceptance. But, with ambitious expansion goals in Asia in particular, that situation is about to change radically. By 2020, the Global Wind Energy Council estimates that offshore wind will make up 10% of all wind power, compared with only 2% today.

A combination of geographical advantage, technical innovation and political policy has made Europe the perfect crucible for offshore development. Onshore development is often controversial, while the North Sea offers excellent wind quality along with shallow coastal waters.

"Europe's geography and skill set lends itself to offshore wind," says Aris Karcanias, managing consultant with BTM Consult. "If you look at the countries around the North Sea with established ports, ships and equipment, you almost have an existing hub for offshore wind development."

Pioneering European turbine manufacturers had the technological expertise and supply chain to adapt onshore turbines to maritime conditions, with the potential for lucrative future exports another reason to invest in this new sector. EU governments long ago adopted a mixture of direct grants and other schemes such as Feed-in Tariffs (FiTs) and Renewable Obligation Certificates. These place a premium on electricity generated from renewable sources, with the highest level of support offered to the nascent offshore industry.

"A combination of geographical advantage, technical innovation and political policy has made Europe the perfect crucible for offshore development."

Reinvigorating moribund shipyards was a driver for countries including Germany and the UK, with the chance to create thousands of new green jobs - a big factor in securing broad political support for offshore investment. Its strong oil and gas sector is another reason for European dominance, offering a rich seam of vessels, skills and technology for offshore wind to mine. Heavyweight developers like Statoil and DONG can also call on internal expertise honed over decades of cutting-edge North Sea projects.

With around 3.3GW to be added by the end of 2014, Europe's offshore dominance is unlikely to end just yet. However, other nations are now making big strides towards a substantial offshore presence, with China, the US and Japan the front runners.

With almost 510MW in operation, mainly in shallow inter-tidal areas, China currently ranks third behind the UK (2,948MW) and Denmark (921MW). Its first offshore farm - the 102MW Donghai Bridge project - only opened in 2010.

At 750GW, China's offshore wind resources are three times greater than onshore and its coastal farm locations are right by the largest population centres. In 2011, the Chinese Government set an ambitious goal of 5GW by 2015 and a jaw-dropping 30GW by 2020.

There is a huge number of projects on the stocks targeted at six coastal locations. The most advanced is Jiangsu, which is planning four new farms, each of 200MW. Once complete, the 1GW Bohai Bay wind farm in Tinajin province will be the world's largest offshore wind farm - a title currently held by the UK's 507MW London Array.

But construction has barely started on concessions granted in 2010 due to a host of inter-agency disputes over where the farms should be located. To make matters worse, the proposed resolution forces developers to go further offshore while they only have a FiT for less expensive nearshore schemes.

"It's just not feasible to reach this [5GW] target in that time frame," says Karcanias. "China needs a formal rigorous process for planning and consenting offshore use. It's a major constraint on Chinese offshore development."

Difficult ground conditions such as mud flats and an unconsolidated seabed add to the challenge. At Donghai Bridge, engineers used a multi-pile foundation structure to cope with the soft ground, with up to ten legs on concrete piles joined by a concrete deck.

However, the odds are in favour of China becoming the world's largest offshore and onshore wind power generator. It has a proven ability to drive large projects through administrative barriers while a growing number of collaborations, such Shanghai Electric's joint venture with Siemens, will bring in western offshore expertise.

"The challenge in the US is more economic than technical – with such low gas prices, there's no motivation for going offshore."

Japan is another country with excellent offshore wind resources, but its very deep water, reliance on nuclear power and resistance from its fishing industry have held back development. The country has a tiny 33.8MW installed today, but the March 2011 Fukushima nuclear incident sharpened its focus on renewables.

According to the Japan Wind Power Association, the aim is to install 7.5GW of sea-based turbines by 2051. Almost all of these will require floating foundations to cope with the 200m-deep continental shelf that surrounds the Japanese coast and there are multiple tests in progress.

One trial scheduled for Q2 2014 will employ two of Mitsubishi's innovative 7MW Sea Angel turbines, one on a spar buoy and another on a semi-submersible platform. There are plans to build as many as 80 floating wind turbines by 2020 on this site, which is suitably located 16km off the coast of Fukushima, and home to the defunct Daiichi nuclear reactor.

With 60GW installed, the US is second only to China in onshore capacity. But deep water, complex permitting arrangements, strong opposition from residents and a lack of investment interest means that, despite numerous long-running projects on the East Coast, Great Lakes and Pacific Coast, offshore wind still has to get started in the US.

The outlook became brighter with the December 2012 award by the federal government of $28 million in grants to fund seven offshore wind turbine test projects. Three of these will then be in line for up to
$47 million to help them achieve commercial operation by 2017. But the shale gas revolution may yet derail these efforts.

"The challenge in the US is more economic than technical," says Karcanias. "With such low gas prices, there's no motivation for going offshore."

Offshore may be set to take off globally, but it faces fresh challenges in its European birthplace. Costs have fallen far more slowly than expected, and issues ranging from a lack of German grid connections to bad weather and vessel shortages mean that deployment is lagging behind the objectives the EU member states set themselves back in 2010.

As projects move to deeper waters far offshore, the learning and prototyping phase must end soon - as must the current level of government subsidy. This has worked well in nurturing the industry but cannot be maintained indefinitely. In the UK at least, a maximum Levelised Cost of Energy of £100/MWh is needed by 2020 if the European success story is to continue.

"There is a time limit," concludes Karcanias. "If the offshore wind industry doesn't lower its costs quickly, it will die."

All statistics courtesy of the Global Wind Energy Council. 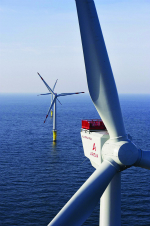 The Global Wind Energy Council estimates that offshore wind will make up 10% of all wind power by 2020. 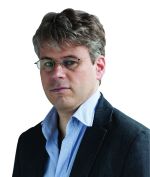 Aris Karcanias joined wind industry researcher BTM Consult after completing a research post at the engineering department of the University of Cambridge, UK.

Offshore winds are stronger and more frequent than onshore.
Post to: